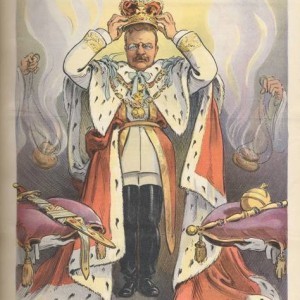 With Republicans expected to gain seats in the House and Senate, it looks like President Obama will cap off his time in office with more gridlock. But if Congress can’t act, he says, he’ll use executive authority to sidestep the legislative process on key issues, like immigration reform and the use of force against Islamist extremists.

Obama’s detractors have accused him of being an “imperial” president. It’s a theme that runs through the course of American history. Call it tyrannophobia — the fear that any one person or party could wield too much power over the body politic. But also: a strange, even paradoxical fascination with strong leadership. So this time on BackStory, we ask how perceptions of authoritarianism in the United States have changed over time, starting with the earliest colonial revolts of the 1700s against strong-arm agents of the British crown. Are wars a slippery-slope to unchecked presidential powers? Why does Congress complain about executive orders, while passing laws that grant the president so much power? And why were so many of the most renowned presidents also seen by many in their day as dangerous, even tyrannical?