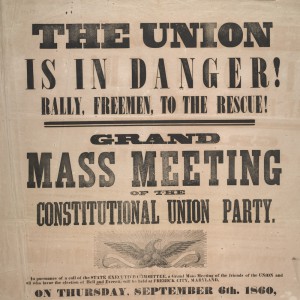 In April 1861, the first shots were fired in what would become the bloodiest conflict ever to take place on American soil. Yet just a few months earlier, the notion that any battles would be fought had seemed unimaginable to many. Though it’s easy to look back on the Civil War as an inevitable conflict, to Americans in the spring of 1861, the prospect of disunion seemed anything but.

In the first of a three-part series on the Civil War, the BackStory hosts try to get inside the minds of Americans in the spring of 1861, focusing on the dramatic six months between Abraham Lincoln’s election and the outbreak of war. Along with their guests, they consider the role of race, gender, and the ever-present specter of slavery in the build-up to war, and explore some unexpected questions: why did abolitionists actually dread the prospect of Lincoln’s presidency? Why did slaveholders in many parts of the South argue against secession? What made the leaders of Virginia – a state central to the nation’s founding – decide to break their ties with it?

‘The Road to Civil War’ helps us understand how a divided America came to see war as the only option.

Next week: “Why They Fought.” The second part in our series, which considers what motivated so many individuals, north and south, to take up arms against each other.