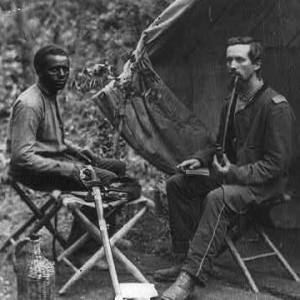 150 years ago this April, the Union went to war with the Confederacy. Ever since, Americans have been debating the causes of that war. Most historians today agree that it was fundamentally about slavery. And so what are we to make of the fact that most Southerners didn’t own any slaves, and most Northerners were not abolitionists?

In this hour of BackStory, the Backstory hosts turn the question of the war’s causes on its side, asking instead why Northerners and Southerners took up arms to fight one another. What causes, in other words, were they willing to die for? Were families on the home-front united in their commitment to war, or were there differences of opinion? Who didn’t want to fight? What did slavery mean to white people on both sides, and what role did enslaved and free African-Americans play in the liberation of slaves? How much did Americans’ reasons for fighting change between 1861 and 1864? And finally – how have intervening wars altered the ways we interpret the motivations of Civil War soldiers?

“Why They Fought” is Part II of a three-part BackStory series commemorating the 150th anniversary of the Civil War.