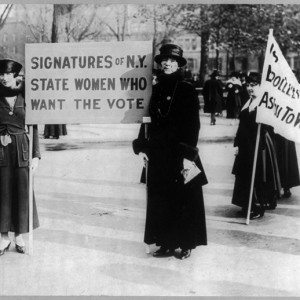 Hillary Clinton moved a giant step closer to becoming the first woman elected President of the United States when she accepted the Democratic nomination at the party’s convention in Philadelphia. Clinton stands on the shoulders of generations of women who fought for the right to vote.

On this episode of BackStory, we look at the different ways women have influenced American politics, including: