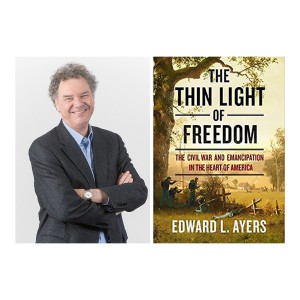 Brian sits down with Ed to talk about a project of his that’s been twenty-five years in the making. We’re talking about Ed’s series on the American Civil War and Reconstruction. The first volume, In The Presence of Mine Enemies came out in 2003, and won the Bancroft Prize.  It opened with John Brown’s raid on Harpers Ferry in 1859, and ended just before the Battle of Gettysburg in 1863.

Ed has just published the second volume in the series: The Thin Light of Freedom: The Civil War and Emancipation in the Heart of America. He picks up the story in 1863, and continues through 1870 and the ratification of the 15th Amendment.