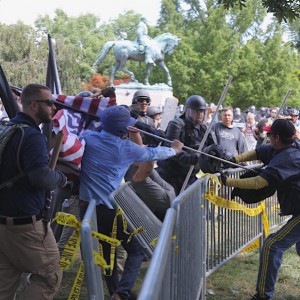 On August 11 & 12, 2017, a “Unite the Right” rally brought chaos, violence and death to the streets of Charlottesville, Virginia. To mark the anniversary, BackStory broadcasts an episode of “A12,” a new podcast series presented by historian, writer and podcaster Nicole Hemmer.

“A12” looks at the legacy of August 12th in Charlottesville and beyond. In it Hemmer, who witnessed the rally and attack, brings together city leaders, activists, scholars, and witnesses to make sense of all the forces surrounding the events. It’s a sprawling story, covering everything from Confederate statues to white nationalists to questions of policing and law. But it’s also an intimate one: a story of trauma, loss and healing.