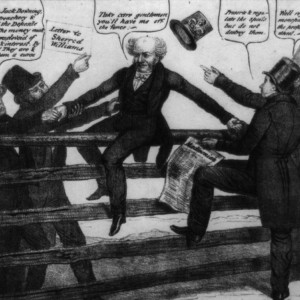 Eric Cantor’s shock primary defeat has left the Republican establishment reeling, and breathed new life into the Tea Party movement within the party. It’s another reminder of the powerful role that party factions can play, and have often played in American history.

Disagreements within parties have shifted the terms of debate, forced new agendas onto the political stage, even birthed new parties altogether. So in this episode, Peter, Ed, and Brian peer inside our political parties and explore some of the influential factions that have left a mark on the American political landscape – from the Radical Republicans after the Civil War, to the Dixiecrats after World War II. Plus, they look back to the early Republic and a time before the formation of party organizations, when “faction” was the only game in town.