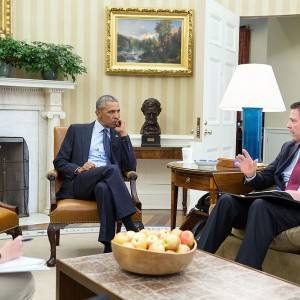 Last Friday, FBI Directory James Comey informed Congress of a potential link between a device owned by disgraced former Congressman Anthony Weiner and Democratic presidential candidate Hillary Clinton. The disclosure effectively reopened the investigation into Clinton’s private server and email activity during her time as Secretary of State. It also set off a firestorm of protests from both sides of the aisle.

Just what is the role of the FBI when investigating politicians and did Comey cross a line with a move that many are interpreting as interfering with a presidential election within two weeks of Americans voting? In this BackStory short take, the hosts talk to Yale historian Beverly Gage about the history of the FBI’s involvement in U.S. elections.