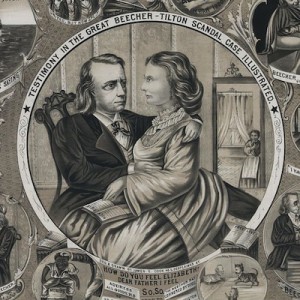 15 years ago this month, then-President Bill Clinton was impeached by the US House of Representatives for perjury and obstruction of justice. The root of the trouble was, of course, the Monica Lewinsky scandal. Though Clinton was later acquitted by the Senate, the trial sparked questions about the blurry line between private and public misconduct. But Americans have been puzzling over just where to draw that line for centuries. So in this episode, Peter, Ed, and Brian look back over other scandals in American history, exploring the public response and the legacies they’ve left behind.

Talking with their guests, the hosts rediscover some of the scandals that captured earlier generations’ imaginations – like a lurid tale of adultery and infanticide at a 1790s Virginia plantation called (no joke) “Bizarre.” Or the 19th century Beecher-Tilton trial, in which a celebrity preacher was accused of seducing his best friend’s wife. And in more recent years, the serious congressman whose affair with an exotic dancer helped end his career, and helped change Washington too. Along the way, they consider what has constituted a scandal in American history and how public attitudes toward them have evolved.