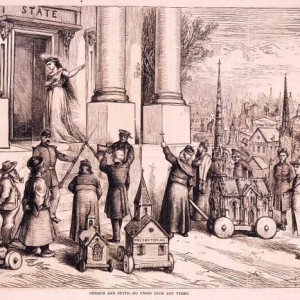 From the persecution of Quakers in colonial Massachusetts, to 21st-century battles over nativity scenes in public squares, the wall separating church and state is hardly set in stone. On this episode of BackStory, the Backstory hosts explore the often blurry line between church and state in America – from Congress’ attempts to block a Mormon Senator in the early 1900’s, to the federal government’s imprisonment of religious pacifists who refused to fight in the first world war.