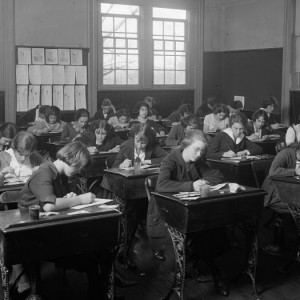 In this episode of BackStory, we explore the history of testing in America. The hosts go back to the eighteenth-century and look at how elite colleges replaced social status with merit and behavior as a way to grade students. We uncover the links between President James Garfield’s 1881 assassination and the civil service test, and look at how officials created the first, “white,” affirmative action program by waiving the test for WWII veterans. The hosts explore the long and troubled history of how Americans have used tests to both exclude and include people from the citizenry.

In the “There’s Nothing Standard About It,” we misstated the name of a French psychologist. His name was Alfred Binet, not Albert.