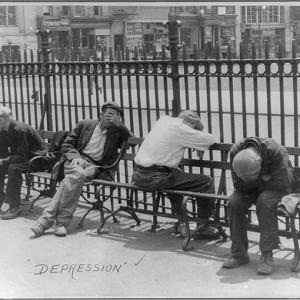 Three years into the worst economic downturn since the Great Depression, almost one in ten Americans is still out-of-work. In many parts of the country, the situation is even worse.

On this special Labor Day episode, the Backstory hosts ask what joblessness has meant for previous generations of Americans. How has the changing nature of employment shaped the experience of not having a job? Have the moral connotations of work evolved?

Over the course of the hour, we hear from historian Alexander Keyssar, take calls from BackStory listeners, and hear an imagined testimonial from an itinerant worker in the “New Northwest” at the turn of the 20th century.