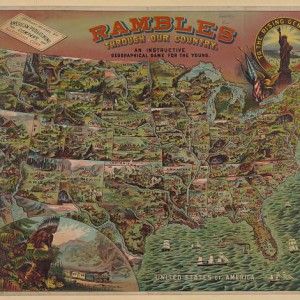 The red state/blue state representation of the U.S. was originally intended to tell us something about electoral politics. But it has come to stand in for a lot more than that. So how did that map’s cultural meaning come to be so fixed?

In the spirit of this question, we’re devoting this episode of BackStory to maps, and asking how the ways in which Americans have charted space illustrate the ways in which they’ve understood themselves socially. Over the course of the hour, the Backstory hosts explore the layered meanings of several key maps. These include a map that helped forge sectional alliances in the lead-up to the Civil War; a colonial-era map that illustrates how Native Americans understood space; a collection of maps that Woodrow Wilson thought might lead to world peace; and an 1890 map designed to minimize conflict over natural resources in the American West.  And – the Backstory hosts uncover the curious story of the map that gave America its name.