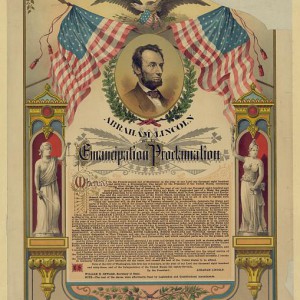 This month marks the 150th anniversary of the 13th amendment’s passage through Congress. That was the amendment that did away with slavery once and for all. But on January 1, 1863, two years before, President Lincoln had issued the Emancipation Proclamation. It declared that all slaves in the rebellious states “shall be then, thenceforward, and forever free.” Today, Lincoln is remembered as “The Great Emancipator,” but the story of emancipation is complex and contradictory. And the question of how we choose to commemorate this anniversary can be touchy.

On this episode, we set out to understand the way Americans thought about emancipation in 1862, and reflect on its shifting meanings since then. Along the way, we make stops at the Emancipation Memorial in Washington D.C., the Civil War centennial commemorations in the height of the Civil Rights Era, and the former capital of the Confederacy today. And we hear the voices of former slaves themselves, remembering their first experiences of freedom.