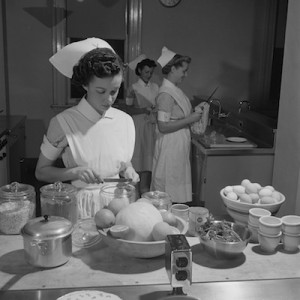 Good fats vs. bad fats, milk chocolate vs. dark chocolate, red meat, red wine, carbs, sugar — all have been the subject of conflicting nutritional advice from “the experts.” In this episode of BackStory, the hosts explore the unexpected ways that past generations defined “health food.” We’ll look at milk’s transformation from a disease-carrying dairy product in the 19th century to “nature’s perfect food” by the 20th century, the popularity of gluten free diets in the late 20th century, and the emergence of the calorie as a way to explain the science of nutrition.

Check out the Blueberry Torte recipe mentioned in this episode via The New York Times.