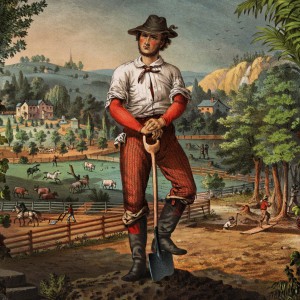 As the fall harvest comes in, BackStory takes a look at how farmers came to wield so much influence in American politics, and American life. In the 18th Century, Thomas Jefferson viewed farmers as ideal citizens, their agricultural lifestyle providing the foundation for a virtuous republic. Just 2% of Americans live on farms today. But farmers still occupy a special place in the national identity. In this episode, Peter, Brian, and Ed consider why the ideal of the self-sufficient, independent American farmer is still so powerful – even as the reality has largely disappeared – and who has invoked that ideal over time. From railroad companies to anti-imperialists, the image of the “yeoman farmer” has served many different ends over the years, and anchored one of the most successful government lobbies in history.