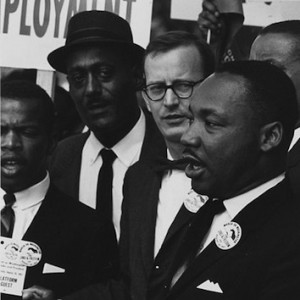 August 28th marks the 50th anniversary of the Rev. Martin Luther King, Jr.’s famous speech in front of the Lincoln memorial in Washington, D.C., when, at the close of the March on Washington, he spoke of his dream for racial harmony and economic equality in America. In this special episode of BackStory, Peter, Ed, and Brian place that march, and King’s speech, in a broader, and deeper historical perspective.

They look to the roots of the march in the radical labor politics of the 1940s, and even further back to the Emancipation Proclamation – the 100th anniversary year of which the march was timed to coincide with. With guests who helped organize or attended the march, Peter, Ed, and Brian consider the anxieties felt by many in Washington in the days leading up to it, and get personal perspectives on the events and impact of the day. And they reflect on that impact in the long-run. Have we achieved the marchers’ aims for “jobs and freedom,” or has the economic part faded from view? What impact has Martin Luther King’s “I Have a Dream” speech had on race relations in the United States? Is King’s plea for action in the “fierce urgency of now” as necessary today as it was 50 years ago?