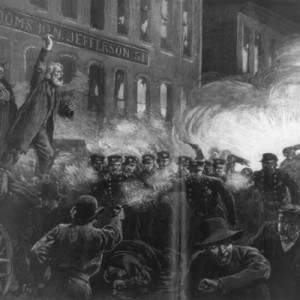 On September 16th, 1920, a bomb exploded on Wall Street as workers took their lunch break. The explosion killed 38 people and injured hundreds. The targets? What today we’d call “the one percent”—powerful financiers who ran J.P. Morgan & Co. The Wall Street attack remained the deadliest terrorist bombing in the U.S. until Oklahoma City in 1995. But at the time, people saw it as just one more bombing in a long string of anarchist attacks.

As Americans wrestle with the aftermath of the mass shooting at the Emanuel AME Church in Charleston, and as we observe the 14th anniversary of terror attacks on New York and Washington, BackStory returns to our episode on domestic terrorism. What are the origins of domestic terrorism in the United States? And what kinds of people and movements have been labeled as “terrorist?” Brian, Ed, Peter and their guests explore the relationship between terror and the state and ask when, if ever, terrorism is justified.