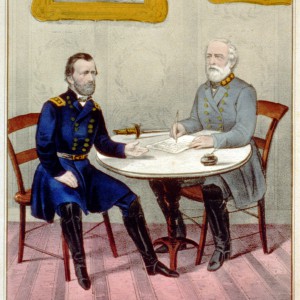 A lot happened in April 1865: Richmond fell to the Yankees, Lee surrendered at Appomattox Court House, Lincoln’s funeral train set out on a long and meandering route for Springfield, Ill., and four years of brutal conflict came to an end. But at the close of the Civil War — 150 years ago this April­ — no one knew how things would turn out for the United States and the defeated Confederacy.

This time on BackStory, the hosts dwell on that moment and explore the uncertainty of 1865. Would the rebellion resurge? Would Southern leaders be hung for treason? Would freed men and women enjoy full citizenship? … How would a nation torn asunder ever rebuild?

We have stories about how Union soldiers enforced emancipation, how formerly enslaved families sought their own reunification, and why Jefferson Davis and other Confederate officials escaped prosecution. Plus, Brian, Ed and Peter take questions at an event recorded live, commemorating the sesquicentennial of the war’s end — in the erstwhile capital of the South.