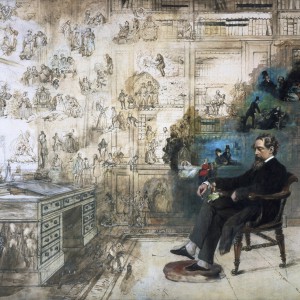 Charles Dickens died 150 years ago this month. A famous chronicler and critic of English industrial capitalism, Dickens was also immensely popular in the United States. But in an age of widespread debate about slave versus wage labor, his writings meant different things to different readers.

On this episode of BackStory, Joanne is joined by Jonathan Wells and Nancy Metz to tell the story of Dickens’ tumultuous — but ultimately triumphant — relationship to the United States and his American readers.

Theme in G by Podington Bear

Stages of Awakening by Podington Bear