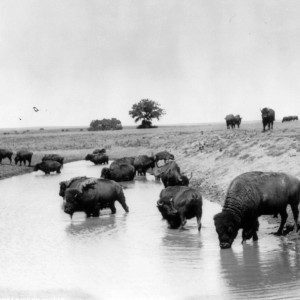 According to the International Union for Conservation of Nature, there are over 28,000 threatened species in the world. But this is hardly the first time our planet has faced the prospect of mass extinction.

In the beginning of the 20th century, America’s flora and fauna were seriously threatened by urban encroachment and over-hunting. And one animal at the center of this struggle was the bison.

So in celebration of World Animal Day, Brian and Nathan explore the history of bison in America. We’ll find out how the bison went from an animal in excess to near extinction and we’ll learn how Madison Grant’s work preserving the bison went hand and hand with his theories on eugenics. Plus, we’ll hear from the Buffalo Representative of the Eastern Shoshone about his efforts to restore the buffalo.