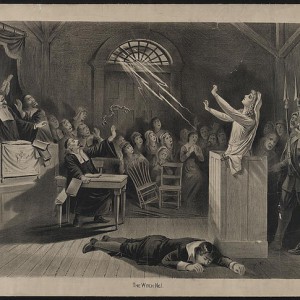 In April 1836, a 19-year-old clerk named Richard Robinson was accused of murdering Helen Jewett, a high-end prostitute at a New York brothel. The city erupted into a frenzy. Tabloids proclaimed the lurid details of the case, moralists wrote pamphlets condemning “dens of infamy,” and newspapers printed word-for-word transcripts of the trial proceedings. But as in many highly-publicized trials today, the media circus was about something bigger—anxieties over class, wealth, and morality in America.

On this episode of BackStory, the hosts will explore our fascination with courtroom drama. What makes for a compelling case and why have some landmark proceedings received little attention? We’ll consider why so many Americans followed the trial of a young clerk accused of murdering a New York City prostitute in 1836, and why we’re still talking about Sacco and Vanzetti nearly a century after they were sentenced to death. From public hanging in Puritan Massachusetts, to the murder trial of Black Panther leader Huey Newton in the late 1960’s, the hosts will reveal the deep-seated issues beneath American trial-watching.