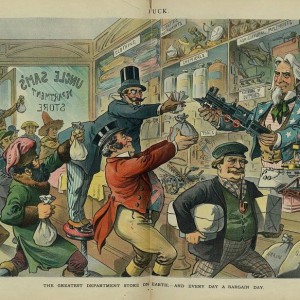 It’s the most wonderful time of the year! Or is it? The holiday season is notorious for bringing out the beast in shoppers. On this episode of BackStory, the hosts plunge into the history of shopping in America—the glitz and glamour, the overflowing shelves, and the cheesy Muzak. They’ll consider the role that consumption played in the revolutionary politics of the colonies, look at the curious rash of shoplifting among well-heeled women in the country’s first department stores, and reveal the connection between the Wizard of Oz and window shopping.