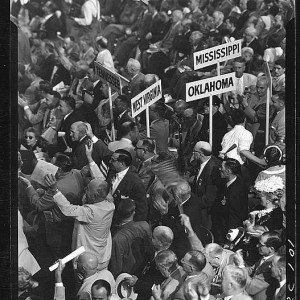 American political conventions have often been unpredictable and this year promises plenty of drama.  Before they became heavily scripted affairs for TV, conventions were where some of the most critical policy questions were resolved, and where political careers were made or ruined. On this episode, we venture into the back rooms, chaotic halls, and streets where these political clashes unfolded. The Backstory hosts hear the voices of anti-corruption crusaders in the 1820s, women’s rights activists at Seneca Falls, and civil rights workers in 1964 – all of whom turned to conventions to push for change. Through it all, we’ll ask how well American political conventions have lived up to their promise of representing constituents back home.