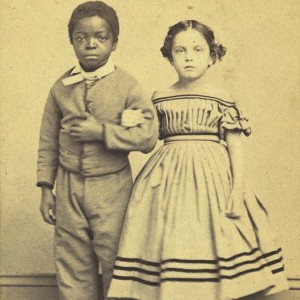 On this episode of BackStory, the hosts will consider how and why Americans throughout the centuries have crossed the lines of racial identity, and find out what the history of passing has to say about race, identity, and privilege in America. We’ll look at stories of African-Americans who passed as white to escape slavery or Jim Crow and find out how the “one-drop rule” enabled one blonde-haired, blue-eyed American to live a double life without ever arousing suspicion. We’ll also explore the story of an African-American musician who pioneered a genre of exotic music with a bejeweled turban and an invented biography, and examine the hidden costs of crossing over.

CORRECTION: This show includes a story about Sylvester Long, a man of mixed descent who styled himself as a pure-blooded Native American named Chief Buffalo Child Long Lance. We refer to him as a movie star who published a famous autobiography. In fact, Long Lance published his autobiography first—the popularity of the book catapulted him into movie stardom.