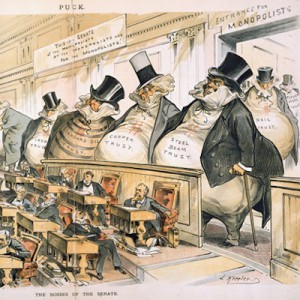 The Supreme Court will soon rule on whether Hobby Lobby, a chain of craft stores, can be exempted from parts of the Affordable Care Act on account of the corporation’s religious beliefs. Raising questions about “corporate personhood,” and coming just a few years after the Court’s still-controversial Citizens United ruling, the case has further fueled the debate over corporate power today. But how did corporations become such powerful institutions in American life? And how did Americans in the past view their role and influence?

In this episode, we explore the changing status of the corporation throughout American history. From the proliferation of corporations in the post-Revolutionary era to the rise of the Gilded Age giants, we’ll consider how corporations have been viewed in the courts and by the population-at-large.