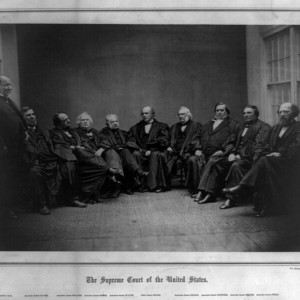 As of June 2016, the Republican-controlled Senate is still refusing to consider President Obama’s nominee for the Supreme Court and fill the vacant seat – a reflection of the divisive atmosphere roiling Washington. Such conflict is hardly new to the high court.

The Supreme Court and its decisions, nominations and justices have often–if not always–been instruments of political power. And politics have also shaped the Court in unanticipated ways. In this episode, the hosts will examine why the Supreme Court is regarded as an institution that remains above partisan squabbles. From Marbury v. Madison, the case that helped to form the court as we know it today to the failed nomination of conservative judge Robert Bork, we’ll look at the fascinating and often unexpected ways in which political ideologies inform judicial actions on the highest court in the land.