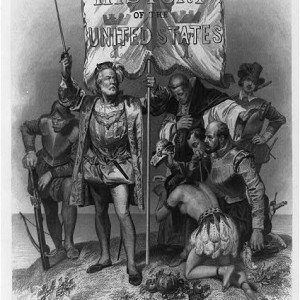 Columbus Day is here again — bringing both celebrations and denunciations of the man whose name the holiday bears. And it’s not just the holiday: Christopher Columbus’s name has been worked into numerous cities across the United States, the names of ships and universities — even a space shuttle. And from an early age, schoolchildren learn about the voyages of the Niña, the Pinta and the Santa María, and the man who “discovered” the American continent. But many Americans have also questioned Columbus’s legacy. Should we venerate a man who symbolizes European colonization, and who inaugurated the decimation of native populations that would continue for centuries?

So on this episode of BackStory, Peter, Ed, and Brian explore the controversial Columbian legacy, diving into current debates, and looking back on how earlier generations have understood America’s purported discoverer. When and why did we begin to revere the Italian explorer? Who has seized on his legacy, and who has contested it?